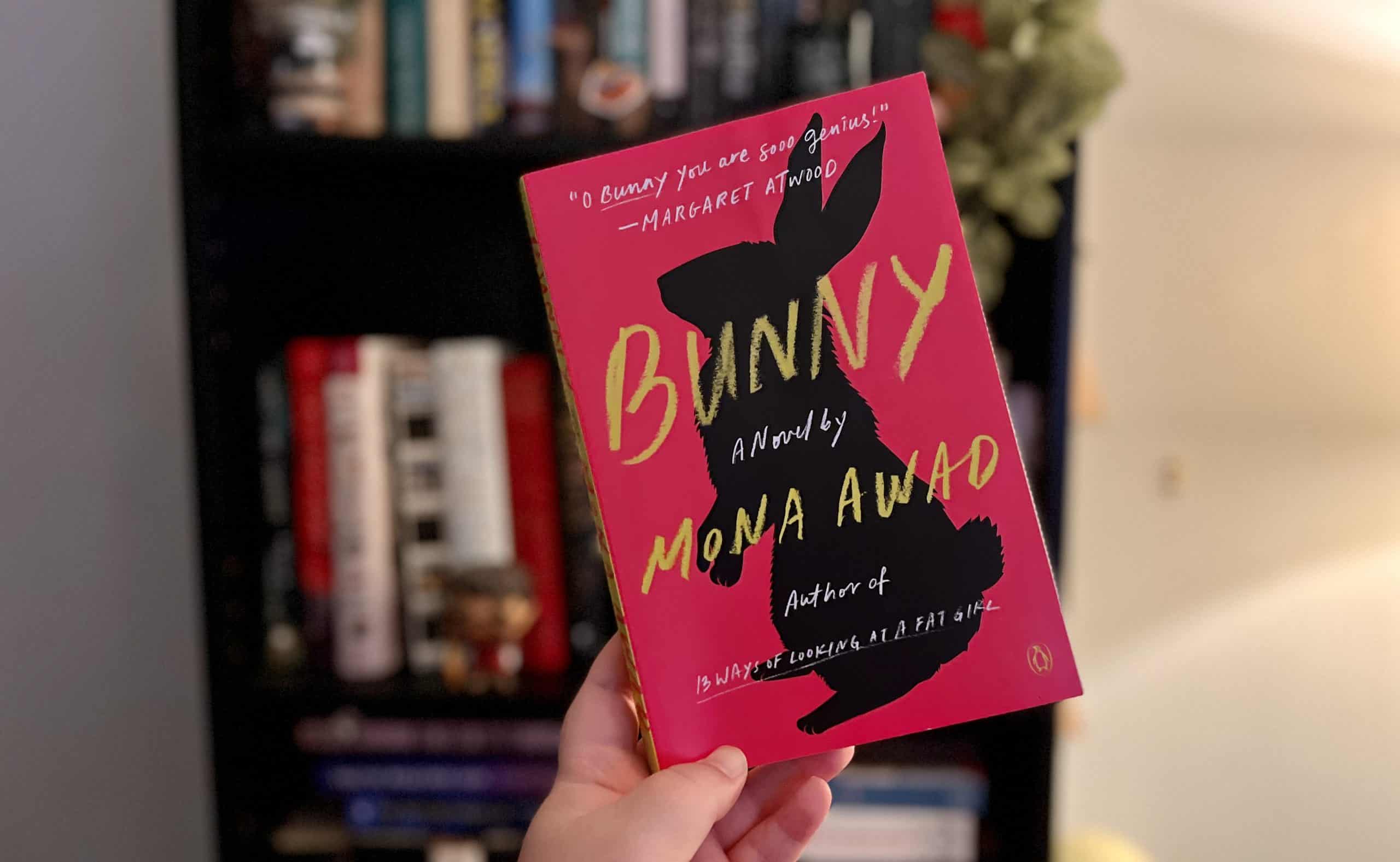 If you have read any reviews or summaries of this book, you might have caught onto the fact that this book can easily be summed up in one word: chaotic. This book is absolutely chaotic and I truly believe Mona Awad wrote this as part satire because there were several moments in the book I could absolutely not take seriously. In my mind, this book is Heathers, meets Mean Girls, meets Jennifer’s Body. If that doesn’t explain it well enough, please read on.

Bunny by Mona Awad centers around the main character, Samantha Heather Mackey. Samantha is enrolled at Warren University, working on earning her MFA. She is in an all-female cohort, the first ever at Warren University. The four other women, of whom Samantha has her own set of nicknames for, also attend the workshop. The story begins with Samantha being invited to the bunny’s “smut salon”. Where they sit around reading lusty stories they’ve made up to help the “creative juices flow”.

However, not all is as it seems. Samantha’s only friend, Ava, is the polar opposite of the bunnies. She is an art student dropout and works on a nearby campus, the rebellious attitude Samantha seems to yearn for is a quality in herself. Despite that, Samantha is sucked into the bunny’s world and nothing is as it seems. “Kill your darlings” is no longer just a term meant for writers, but rather the slogan for the cult-like coexistence the bunnies seem to live in together.

My Thoughts on the Plot

Oh, man. This book felt like one that readers either really disliked or really enjoyed. I am kinda surprised to be on the latter side. This book read like a satire at certain points, with Mona Awad making fun of her experience while completing her MFA program. The bunnies certainly emulated Heathers meets Mean Girls as characters.

A couple of smaller plotlines lines could have been left out. Samantha’s relationship or lack thereof with the “lion” made very little sense. There wasn’t enough between them for it to make sense within the bigger picture of the story. The magical realism within the book also didn’t fully make sense either. Is this satirical or is this magical?

I can fully understand how this book comes across as polarizing. Mona Awad is complaining about something that is completely optional. I have a BA in English and Creative Writing and never felt the need to continue onto an MFA program because 1) the cost and 2) I don’t need it. So to read a book where a privileged writer is complaining about her privileged experience, definitely rubs me the wrong way, despite how much I may have enjoyed the book.

My Thoughts on the Characters

Where do I even begin? This feels like one of those “you had to be there” moments.

Samantha as a character is very lost and seems to suffer from some serious mental health issues. There are far too many points in the story where it is just Samantha being self-deprecating. Samantha’s relationship with Ava is one that doesn’t make sense most of the time and seems fairly co-dependent in quite an unhealthy way.

The bunnies, however, were not meant to be taken seriously. At all. The bunnies seem to only embody everything Mona Awad hated about her MFA program. Nothing more than pretentious, uncreative, shallow, rich girls. The complete opposite of Samantha. Samantha’s nicknames for the bunnies at times were annoying and even by the end of the book, I still was not 100% sure whose nickname belonged to who.

Despite that, the bunnies might be my favorite set of dislikable characters.

Other smaller characters include a guy named Jonah, a poet, who wants to be Samantha’s friend but everyone only comments on how he wants to sleep with her. There’s a professor nicknamed “the lion” who plays a role that didn’t feel necessary. Another professor, Ursula, is in charge of the workshops and always seems to have no interest in anything other than “touching the wound”.

If you do decide to read this book, do yourself a favor and don’t take it seriously. This book is also classified as a horror but it was not scary, in my opinion. If anything, a bit gory might describe it better. Mona Awad’s feelings on MFA programs are very clear, unfortunately, her story felt a bit all over the place. Perhaps, that was the point.

Despite my criticisms, I actually enjoyed this book. There were several times I would put it down and just laugh. I felt as ridiculous as the characters within the book and I would only recommend this book to a small handful of people. You have to be patient, but underneath all the muck there is a point to this book. Mona Awad just doesn’t do the best job of laying it out for readers.

With all that said, I rate this book 4 out of 5 stars.

If you want to dive into this crazy story, grab a copy here. And if you’ve already read it, what did you think?