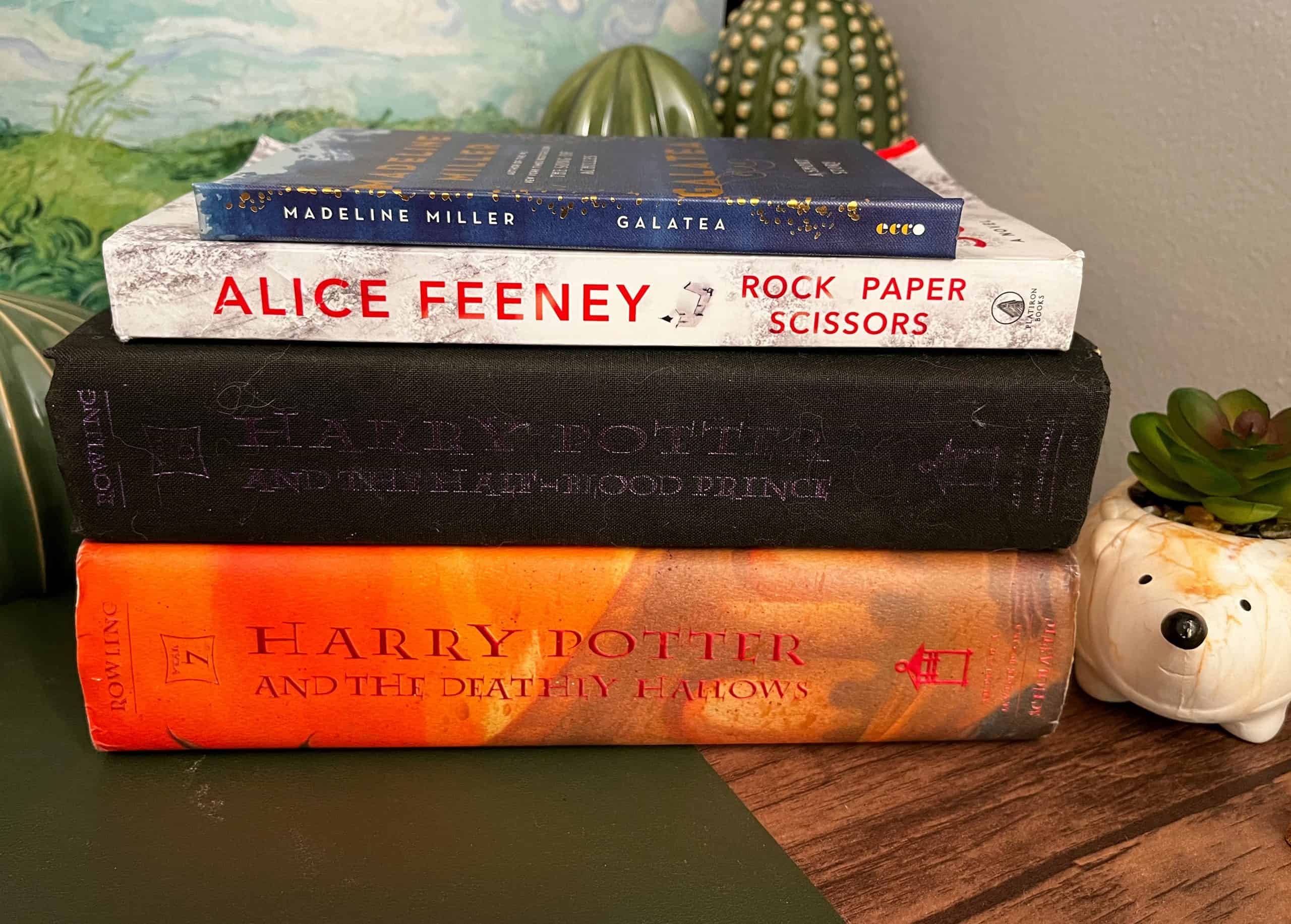 My December Reading Wrap Up

December was a month spent preparing for the holidays and gearing up for the end of the Harry Potter series. I managed to squeeze in two other stories, but reading the last two Harry Potter books took up the majority of my time. Which, if you have read the books, can understand why. They’re hefty novels. Anyways, let’s jump in to this month’s reading wrap up.

1. Harry Potter and the Half-Blood Prince by J.K. Rowling

This book centers around Harry Potter’s 6th year at Hogwarts: School of Witchcraft and Wizardry. Harry, Ron, and Hermione are now 16 years old, they’ve gone through more than most 16-year-olds, and they’re gathering all the knowledge they can on “he who shall not be named”. This is also the book where we lose a beloved main character and things begin to become a bit darker and more serious, compared to the other books. I don’t want to go into too much detail as I’ll have a review coming out as part of my series reviewing the Harry Potter books.

[Link to book review will be added once it goes live on the blog.]

Overall, I enjoyed this book. As a reader, I’ve grown with Harry. But I’ve never truly seen him be a child in the way he deserved to be. Year after year there is some problem, where Harry is naturally at the center of it. *SPOILER* In my opinion, the novels begin to take a much darker turn around Cedric Diggory’s death in Harry Potter and the Goblet of Fire.

We see a lot more mature themes happening within the book. We also see romances develop and fall apart. Lines are being drawn in the sand and we begin to see communities divided.

2. Harry Potter and the Deathly Hallows by J.K. Rowling

The final book in the Harry Potter installment. The final battle is fought and a winner is decided. Some will lose and some will win. Some will die and some will live. Harry and his friends begin their final journey to destroy the Horcruxes, and ultimately, Lord Voldemort. *Horcruxes are pieces of Voldemort’s soul that help keep him bound to the mortal realm/earth with everyone else living.

There is a lot of movement in this book. We see some familiar faces and begin to uncover truths about others. If I am being honest, this book made me change my mind about Dumbledore. I used to adore him thoroughly, a “protect him at all costs” level of adoration. *SPOILER* But upon reliving Snape’s memories in the pensive during his last moments, and then when Harry speaks with Dumbledore after being struck down by Lord Voldemort, I really began to question Dumbledore’s portrayal. Seeing Dumbledore from Harry’s perspective, it is clear why he is seen as a trustworthy, level-headed, kind wizard. However, between Snape’s pensive, Harry’s final conversation with him, and Abernathy’s story about his last memory with his brother, I am stumped. The picture of the man I once placed on a pedal stool is forever tainted.

However, when I remember that we meet Dumbledore through eleven-year-old Harry’s eyes, it is hard to see the dark truths that lie beneath the surface. There is also a nice epilogue at the end of the book to wrap up the story. It was really nice getting to see a glimpse of who ended up with who and whose kids were headed to Hogwarts themselves.

Rock Paper Scissors by Alice Feeney is a twisty novel that questions how much you really know about the people you love. Mrs. Amelia Wright wins a trip to a mysterious old chapel in Scotland that has been converted into a house and brings her husband, Mr. Adam Wright in hopes that a weekend away will solve their marriage problems. Each year, Adam’s wife writes a letter to her husband and they exchange gifts appropriate for that year, ie paper, cotton, poetry, tin, etc. They are both aware that the other is lying, but, they’ll have to uncover the truth for themselves.

Let me preface this by adding, I read Daisy Darker by Alice Feeney before this one and did not really enjoy the ending. The clue-like story with the influences of Agatha Christie really pulled me in. Check out that review here. This book, however, LOVED.

Adam and Amelia are not the perfect couple. The letters reveal a couple that was once happy and in love but ultimately torn apart by lies, infertility, and betrayal. Adam’s inability to recognize facial features is really what helped this book be the messy, twisty, gasp-worthy read it is. My favorite part of this book is the vagueness and how you think you have the whole story and then BAM, you were wrong all along and the truth is shocking.

There was one bit I did not particularly like. *PARTIAL SPOILER* Initially it is revealed that Amelia killed Adam’s mother, Amelia pays for this but ultimately it ends up being Adam that killed his mother. I wish it had remained Amelia because instead of me rooting for the pairing at the end, I feel torn because Adam is actually a psychopath. *END SPOILER*

Overall though, this book was so much better than Daisy Darker was and I recommend it if you’re in the mood for a thriller with lots of twists and turns.

“Galatea” by Madeline Miller is a short story that reimagines the myth of Galatea and Pygmalion. A sculptor creates a sculpture of a woman that is so beautiful, he is gifted the sculpture life by a goddess. He then marries the woman and they have a daughter. The problem, however, is that the sculptor is a jealous, angry, and possessive man.

Madeline Miller packs a lot of emotion into a tiny story. The book itself is very small and the story is very short. At first, I wished she would have written it to be much longer. I could see the potential for it to be like its sibling books, Song of Achilles and Circe (both of which I love). However, I was fuming by the end of the story. Relief and anger pulsing through my veins at the events that take place within the little story.

However, I did enjoy the story. I think Madeline Miller put a realistic spin on the myth of Galatea and Pygmalion. I definitely recommend it if you like stories about mythology and want something to fill about twenty minutes.

I’m really looking forward to reading some new books I bought over the holidays. A few I will be reading ASAP are Babel by R.F. Huang, The Atlas Six by Olivie Blake, The Secret History by Donna Tart, and Convenience Store Woman by Sayaka Murata.

If you noticed a theme, I’m sending you a virtual high-five. I have been into a lot of thrillers, dark academia, historical fiction, and Japanese fiction stories lately. While I really enjoyed the Harry Potter series, it took me four months to read through the whole series, and at times, felt a bit stiffened and wanted to reach for something different.

That said, what are you looking forward to reading in the new year?

Easing Into 2023 with my January Reading Recap